May is a big birthday month in our household. Daniel and Kendall have birthdays separated by just five days.  This year May was packed full of activities for us so I made the wise decision to throw a joint birthday party for the kids. I decided we’d keep the party very small with just a few families from Daniel’s preschool. Like most second children, Kendall’s closest friends are the younger siblings of Daniel’s buddies.  We’d have it at a local park, neutral territory so there wouldn’t be any issues with sharing toys and more importantly so I wouldn’t have to worry about cleaning my house.

When my friend Val asked me what the theme for the party was, I felt a little panic. That night I scanned Pinterest for party ideas. Pinterest is like mom-crack. Their inspiration boards always lure me in with flashy photos of cute clothes I wish I was wearing, delicious food I want to be  eating, projects and crafts that require only 87 steps to complete, and promises of a washboard stomach that will magically appear from the combination of eating paleo and exercising.

The section for kids’ birthdays is especially overwhelming. It is full of adorable party themes with coordinating invitations, décor, snacks, games, and treat bags. Mostly homemade, of course. Gah! The pressure! What theme would combine Daniel’s wish for a “Mighty Machines” party and Kendall’s obsession with “Go Diego?” What if the guests realize I made brownies from a Trader Joe’s box mix? Crap, now I have to download cute font and graphics to make labels for the bottles of water!

And then I realized that although a lot of moms are good at throwing those birthday parties for their kids, it’s just not me. We ended up getting pizzas and snacks with juice boxes for the kids and beer for the parents. There were no organized games or cute themed décor. It was just the kids being kids at the park. And you know what? People ate, played, and had fun just hanging out. It may not have been a party worthy of Pinterest but I’m going to call it a success. 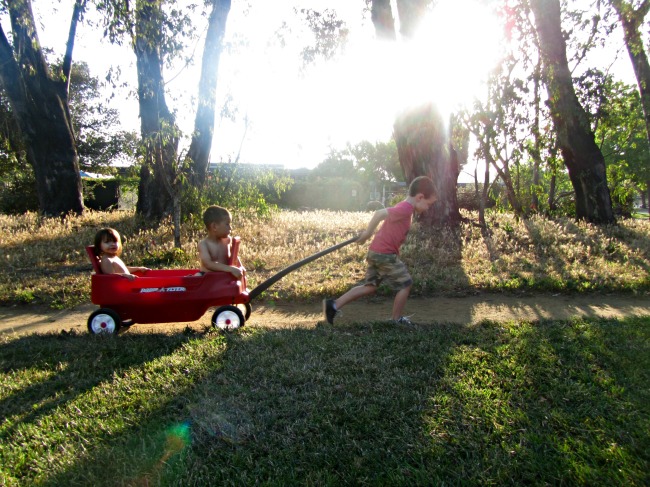 This spring we signed Daniel up to play tee ball. At the time, we thought it was a great idea. The program was specifically for pre-K kids and emphasized being a non-competitive introduction to the game. A couple of good friends were also signing up so Daniel would have buddies on his team.

I never expected Daniel to be a baseball star, but thought he’d have a good time. He always had fun hitting the ball in our front yard. We’d played enough with him in the past couple years to discover he threw right and batted left.

Then came the first day of tee ball. It was a disaster. Daniel refused to do the warm-up stretches. Or run the bases. Or wear the batting helmet. When it was his turn to hit, he would pretend the bat was too heavy for him to lift and make his body go limp. There was feet stomping, whining, crying.

As Daniel continued to pitch a fit (no pun intended) I felt my eyes begin to brim with hot tears. I was crying because I was embarrassed at his behavior. What must the other parents think of me? Why was Daniel behaving this way? Didn’t he know baseball was supposed to be FUN?!

The next week went better. Daniel participated for the most part. There was no crying and a lot less whining. This may have been due to the many pep talks we gave Daniel throughout the week but was more likely influenced by the promise of frozen yogurt I bribed him with. I started to feel a little more hopeful. Maybe this wouldn’t be his first and last season of tee ball!

Today we had team photos. I’ll just let the photo speak for itself: 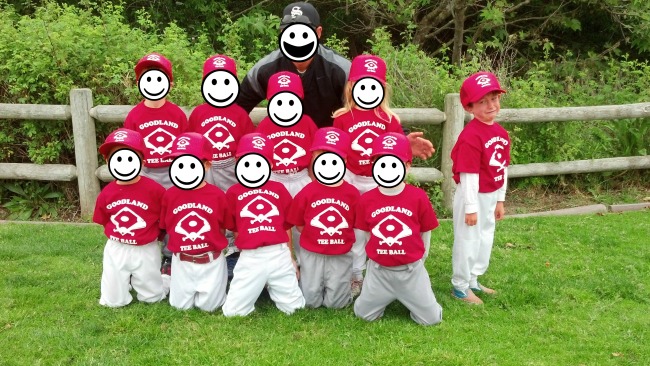 (I have disguised Daniel’s teammates’ faces for privacy, but trust me, no one else was crying.)

My friend Stephanie (whose son is totally smiling in the photo) assures me that this is a cute photo that I will one day be able to laugh at. Deep down I know she’s right. But still. It’s so much funnier and cuter and more amusing when it’s someone else’s kid who is ruining the team photo.

When I used to daydream about having a family I always pictured myself with spunky and sporty little kids who would joyfully run around the baseball diamond/soccer field/basketball court.  But our kids aren’t always going to enjoy the sports or have the personalities we envisioned. And Daniel is helping me learn that.

I’m going to save this team photo. And I’m going to learn to look at it and feel proud to be the mama of this spirited child.

P.S. I should add that Daniel quickly recovered from the trauma of taking team photos and enjoyed his game today.

Bikinis and the F-word

We are leaving on vacation tomorrow, and I am packing our suitcases. With two young ones, this mostly entails a lot of transferring clean clothes from the dryer to the suitcase before they manage to get dirty again and trying to thwart the kids’ attempts to “help” me pack.

Since we are traveling to a tropical destination (yay!) it also involves trying on last year’s bikinis for me. This is where the f-word comes in. Not that f-word! But the one used unflinchingly by millions of females as they pull on their bikinis. FAT. As in, “Does this make my butt look fat?” and “I feel fat today” or “My legs/stomach/arms/(insert any body part here) are too fat.”

Although my daughter is only just shy of her second birthday, like most toddlers her age she quickly soaks up conversation around her and new words are uttered daily. And I am determined that the f-word will not be a part of Kendall’s vocabulary.

I want Kendall to look in the mirror and see her dimpled rosy cheeks. Her beautiful full lips. Her soft hair kissed by golden rays from the sun. Her strong, sturdy little legs. Her enormous eyes the color of tumbled sea glass. Her full, golden tummy and sweet belly button. Her dazzling smile.

The best way I can do this is by practicing healthy body acceptance myself. Gazing at my bikini-clad body in the mirror I remind myself that those tired boobs fed and nourished two human beings. The deep creases on my forehead are souvenirs from laughing and playing hard.  Those puny arms have enough strength to carry multiple bags of groceries or propel me through the ocean. My legs? They have helped me complete triathlons and herd small children. I try to smile at the reflection that stares back at me and hope that Kendall will see her mother appreciating the gift of a strong, healthy body.

I am making a conscious effort to ban the f-word from our house. 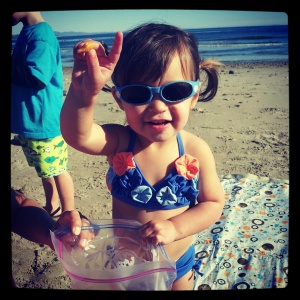 Grace in my kitchen

We were in the midst of another epic meltdown. Our four year old son’s sobs filled the kitchen. He had been wronged. Life wasn’t fair. Who had caused him this pain? The culprit was his sister. Yes, a petite, doe-eyed, chubby cheeked toddler. Kendall, innocently armed with a pencil had (gasp!) scribbled on two pages of Daniel’s newly delivered magazine. Clearly this was a catastrophe.

My eyes met with my husband’s and we exchanged a knowing glance. You know the look. It’s the we-can’t-decide- if-we-want-to-scream-or-laugh look. “It’s not a big deal, buddy,” Brian reassured him, to no avail.

“But I can’t see the pictures at all. She ruined it!!!” The wails and sobs began to escalate.

Kendall stood by me with both concern and the remnants of dinner plastered on her face. “Your brother is sad because you colored on his magazine. We color on coloring books. Can you tell him you are sorry and give him a hug?”

And then grace found us. Right there, in the middle of our messy kitchen filled with runny noses, dirty dishes, and sippy cups.

Kendall walked over to Daniel, who was practicing for his future best actor in a dramatic series win. “Sorr-ee, Dan-oh.” Kendall spoke with earnest. “Sorr-ee, Dan-oh”, she repeated seeking out his teary eyes.

And brother and sister embraced each other.

Later, as I helped Kendall erase the pencil marks on her brother’s magazine I thought how easy it is to chalk up Daniel’s tantrum to his age. But what was my excuse? How many times had this 30-something year old blown up for something that (if I’m being honest), was really not a big deal? How readily did I let go and forgive? Or did I hold on to my anger over little things, harboring grudges and resentment against others?

And once more, the after dinner lesson in forgiveness for my kids became a lesson for this mama too. 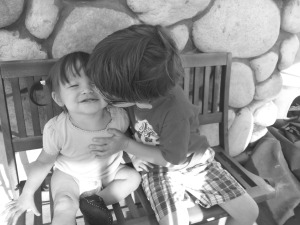